Seeking to Know the Wood Itself and Reveal Its Inner Beauty

Seeking to Know the Wood Itself and Reveal Its Inner Beauty

Takayuki Kida began his current path as a woodworker more than thirty years ago. As he has said, “I create contemporary Japanese furniture utilizing a traditional approach. I am a woodworker because I’m using wood. But I feel like an artist.” Fur 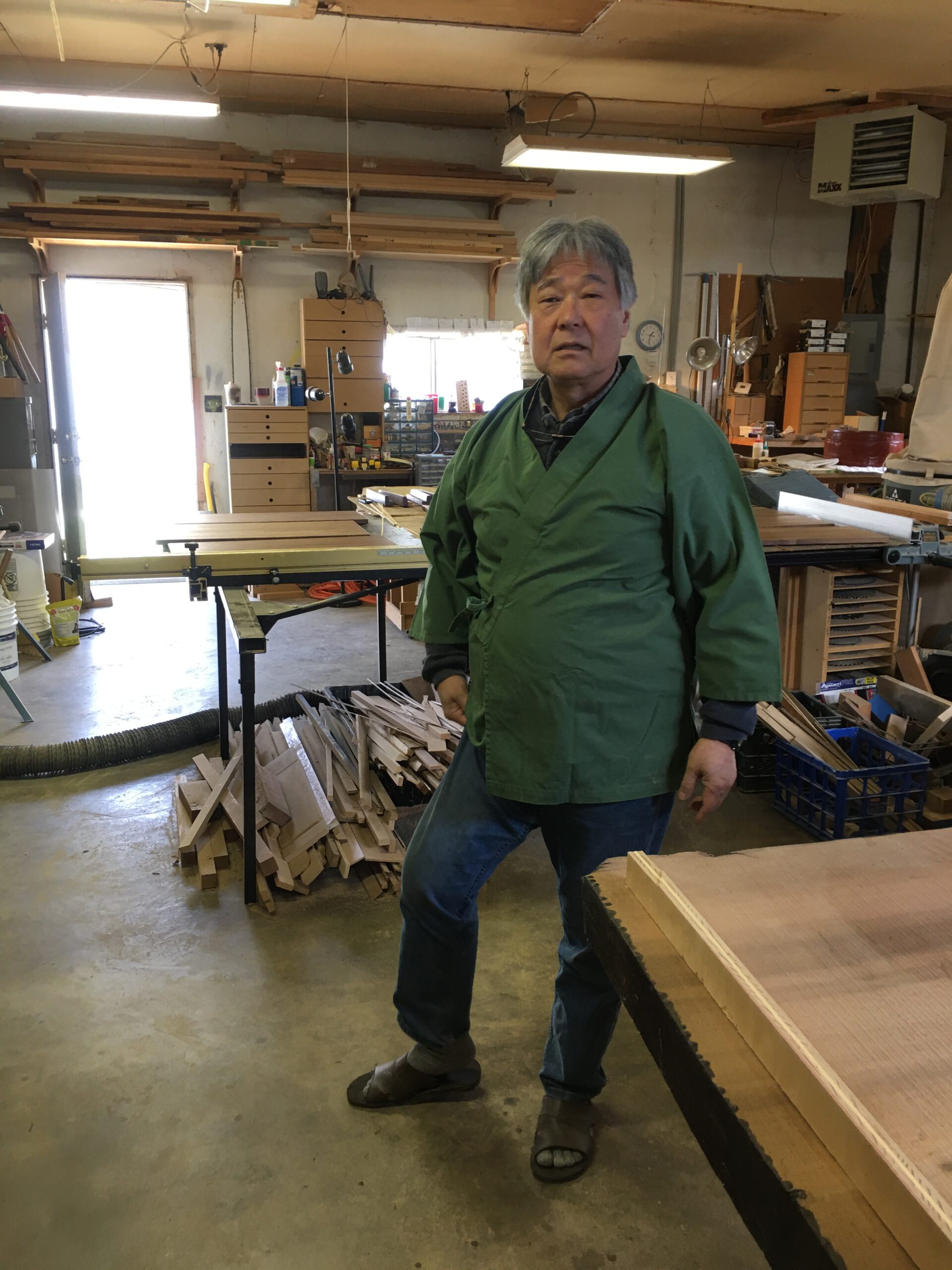 niture must be safe, useful, and strong enough for people to use. Tak uses traditional designs in creating beautiful artistic objects. Designs may seem simple, but for him nothing is simple. Creating simple design is not a simple process, because nothing can be hidden.

More than anything else, Tak seeks to give wood a “second life.” This phrase comes for the philosophy of George Nakashima, whose classic book, The Soul of a Tree, articulated a powerful set of values about the materials and tools of woodworking, and specifically about making furniture. The Soul of a Tree is Tak’s bible.

Nakashima started the tradition of creating slab tables, with the goal of giving a second life to the tree. He wanted to create fine furniture that was both useful and lyrical. Placed with other Japanese residents of the United States in an internment camp during World War II, he later found a home in Pennsylvania. Nakashima had traveled extensively in Europe and Asia. Tak has followed this path, and after reading this book, Tak decided to go to school to learn woodworking. Sometimes people try to copy Nakashima, or alter parts of his philosophy. But Tak believes that Nakashima’s basic principles are so sound that they should not be changed.

So “I want to know the wood itself,” as he has said. If there aren’t any cost or other limitations, Tak thinks about several issues: how to do the best for each piece of wood, considering where the wood is from, the directions of its grain, and the top, bottom and parts of the furniture he has in mind. One of his jobs is to show the inside of the tree, especially its elegance and natural character. 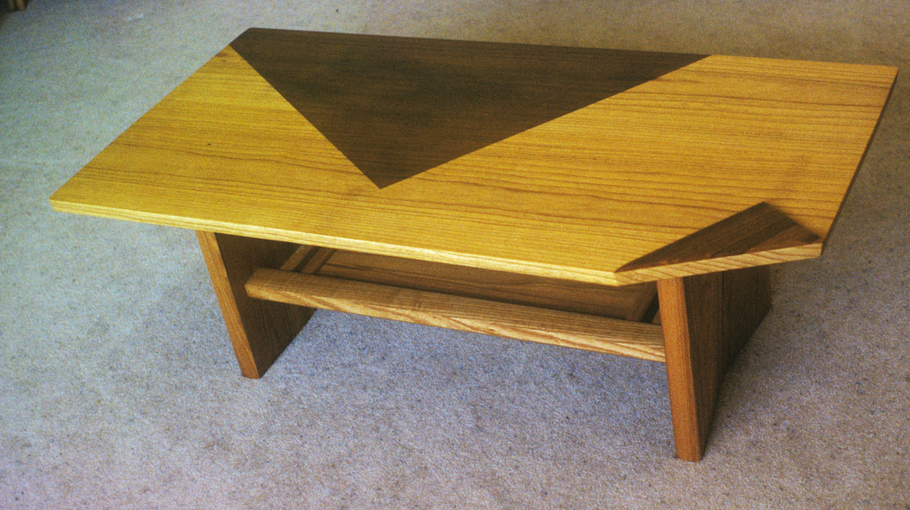 Tak also is passionate about sharing his knowledge about tools with others. Just how these values developed in Tak’s life was a fascinating journey.

After growing up in Tokyo, Japan, Tak studied engineering in college in Tokyo. Later, he worked for about 5 years for Oshima Prototype Engineering. a small company popular for developing optical fibers and connectors that were used in satellites. While at Oshima, Tak had a variety of challenging design jobs.

Later he went to New Zealand for a year to visit friends and study English in Auckland and travel around NZ. When he returned to Tokyo, Tak decided to go back to school at Fukuchiyama, north of Kyoto, for a year-long course focused on furniture. While attending this government school, he was paid a salary during the full-time year.

With his engineering background and design work Tak already knew much about how to make things, but unlike other carpentry courses, which include learning to make window frames or sliding doors, this program had a strong focus on the unique skills for creating elegant furniture. He also experienced different styles as in that program, one teacher was very traditional and the other more  contemporary. 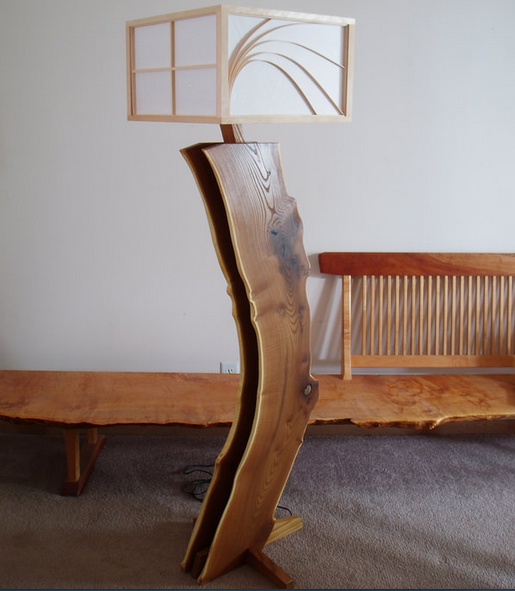 Besides work in the studios, he and his classmates visited older students who had shops and they learned how to set up a business. At this time Tak also began to acquire tools: traditional Japanese wood block planes and chisels, as well as some western tools that were quite different. The course was intensive and provided him with a fine education in furniture making. After this study he worked at Sakura Seisakujo in Kagawa, which was the only company manufacturing George Nakashima’s furniture for the Japanese market.

Tools and Materials
Tak is a tool maven. 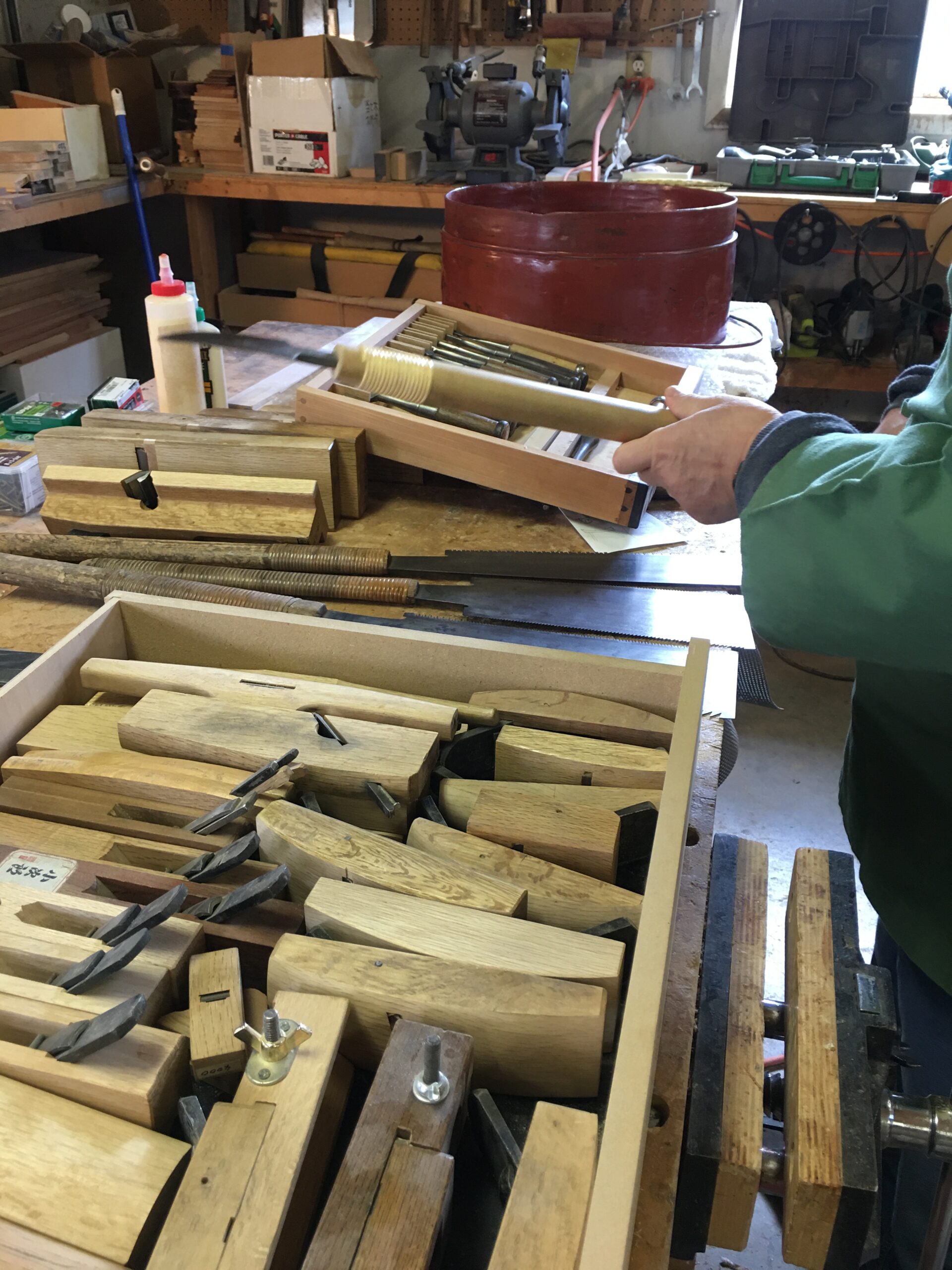 He doesn’t usually use the traditional Japanese tools that he acquired in Japan through the process of visiting the shops of the toolmakers. When he came to the US, the technologies for tools were very different. Tak’s shop is full of exquisite tools – chisels, wood block planes, saws, hammers, clamps of many colors and sizes, and a range of power tools. He keeps some tools to bring to the job sites wherever he might be working because they aren’t so precious. Both inside his shop and outside, Tak stores trees and slabs of both hardwood and soft woods: ash, chicory, butternut, cherry, cedar, pine, cherry, walnut, and maple.

Projects
Tak has undertaken a variety of projects for his Buddhist sangha, Mangala Shri Bhuti, founded by Dzigar Kongtrul Rinpoche in the early 1990s. Beginning in the late 1990s, Tak’s projects for the sangha were at Phuntsok Choling, a dharma center near Ward, Colorado. There he worked on a Shinto gate, a wooden bridge to the platform where large programs are held in a shrine tent, and a shrine structure that houses a large Buddha sculpture donated by Ani Pema Chodron to the sangha. 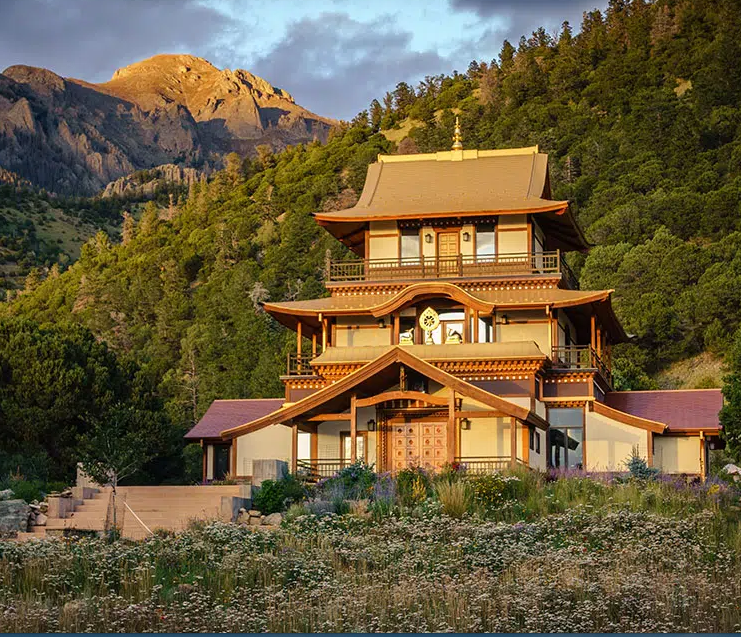 In 2011, he began to also work at the Sangdo Palri Temple at Samten Ling Retreat Center in Crestone, Colorado. He worked closely with professional architect and designer Kelly Smith to create a desired Japanese form for the temple at the request of the Venerable Dzigar Kongtrul Rinpoche. Having traveled in Japan, Kongtrul Rinpoche wanted to use Japanese design elements in the temple. Later Tak helped the building crew, and following a lengthy design process, he did the woodwork for the front entrance. This was built in his own studio and transported to Crestone. Through all of this he worked closely with Dana Ming and others, and the whole crew had help from Timmerhus, a Boulder company that provided transportation, cutting of large slabs of wood, and critical consultation regarding the unique roof.

Tak selected woods, did detailed cutting and laminating, and built the main shrine through a painstaking process. He also worked extensively on another smaller temple, the Tara Dzong. He not only made the front entrance posts, but also designed and built the shrines in the Tara Temple through a slow and careful collaborative process. All of this work, which was completed in early 2022, is a mix of Tibetan and Japanese design and motifs, using American materials and engineering. When asked what his favorite parts of the work at Samten Ling have been, Tak replied immediately that giving form to Rinpoche’s ideas and considering the possibilities for the materials provided great joy and satisfaction.

Tak has been involved with others to create three gates at the Denver Botanic Garden (blog featured photo), as well as the Moon View Deck. The material for this deck was very special – Port Orford Cedar, from a Native American site in the Pacific Northwest. 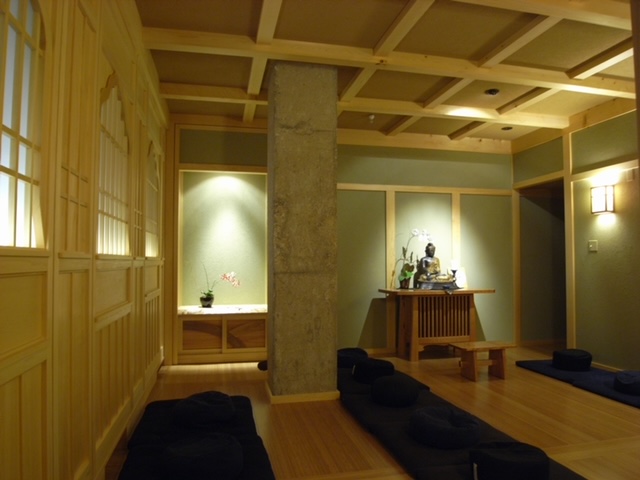 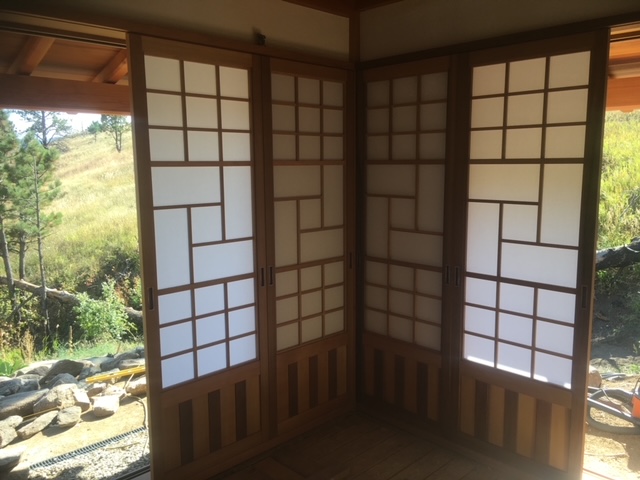 Current Activity
Tak has taught in a variety of settings, including at Red Rocks Community College for five years. There he showed students how to use Japanese tools to make simple objects, as well as how to set up tools. He would help people make shoji screens or small tables and show them how to make various kinds of joints. Although he does not have an apprentice at this time, he is open to creating opportunities for others to come and study with him in his shop and at the new East Side Art Institute in east Boulder County.

At the new ESAI site, located off Isabelle Road and Highway 287, Tak has been active in preparing the fourteen-acre site, cutting dead trees, clearing brush, and helping to create the inside studio spaces. Presently, he is planning to initiate a study group on Japanese traditional tools beginning in August. He had done this before the Covid-19 pandemic and doesn’t need power tools, so ESAI will be a perfect place to do this. On Saturday July 30th he will offer a demonstration, with a study group to follow.

Tak is also active in the Denver woodworking community. About thirty years ago, Japanese temple carpenters started “Kezuro-kai” group competitions in Japan, and more than fifteen years ago they came to California. He joined a few years, and later he started Kezuro-kai Colorado with competitions around the skill of “shaving,” seeing how thin people could make the wood. Tak did this at Red Rocks Community College, and then at a shop in Denver in 2018 and 2019. And his group will offer a demonstration this year on June 25-26, during the Cherry Blossom Festival in Denver.
For more information visit Tak’s website at www.takanadesign.weebly.com

About the Author: Deborah J. Haynes

Deborah J. Haynes is an Emerita Professor of Art and Art History at the University of Colorado in Boulder. Having earned an M.F.A in studio arts from University of Oregon and a Ph.D. in religion and art history from Harvard University, Deborah identifies as both an artist and art philosopher. Her creative projects include mixed-media drawings, marble carvings, installations and writings, all of which explore themes such as death and dying, religion, and contemplative practice. Haynes’s background in caregiving, meditation, spirituality, and hospice volunteer work serve as inspirations for her artwork. Deborah Haynes has published seven books, the most recent of which explores art and spirituality: Beginning Again: Reflections on Art as Spiritual Practice.