Thick, dark hair framed her strikingly pale skin. They called her “Vamp” as a kid, short for Vampire. Appearance wasn’t the only way Denise Zubizarreta stood out within the predominately Latiné communities she grew up in between Florida and New Jersey. Born to a Cuban father and Puerto Rican mother, Vamp’s natural propensity to question cultural narratives, expectations, and stories also set her apart. Upon tracing her roots back to the Taíno people who are indigenous to the Caribbean islands, Vamp took it upon herself to learn about her ancestry and how the people of the Caribbean diaspora had been impacted by Spanish colonization. As a mixed media, interdisciplinary artist, researcher, writer, and community advocate, Vamp is driven to give a voice to the forgotten figures and hidden histories of her heritage.

While Vamp always knew she was a creative, it was not always clear which path she would take. From serving in the US Navy and pursuing a career in Pharmacy, to spending nearly a decade as a standup comic and working as a graphic designer, Vamp tried on a variety of professions. It took her years of exploring these many paths to settle into the work that she feels is most fulfilling: visual art and installations. 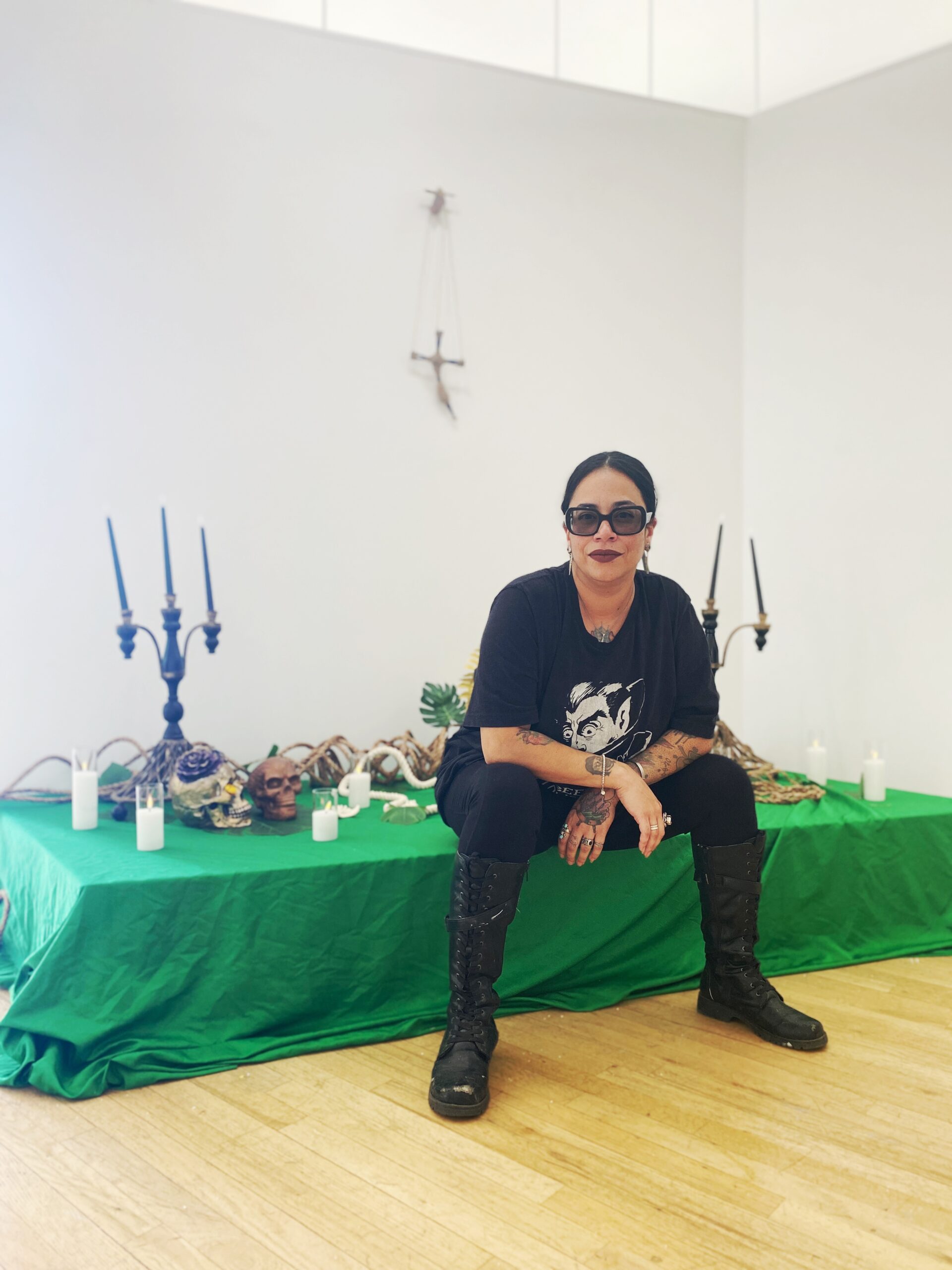 Now living in Arvada, Colorado, Vamp uses art as a vehicle to resist colonial whitewashing, spark meaningful discourse, and advocate for her community. Woodworking, hand building, graphic design, gilding, etching, and photography are some of the many mediums she employs. Her desire as an artist is to pull all the elements within a piece together, so that they “create one unique experience.” Having demonstrated a commitment to inclusivity, diversity, equity, and accessibility, Vamp won the IDEA Award and was granted space for her most recent solo exhibit El Bohío del Bohiti.

El Bohío del Bohiti, Vamp explains, is “an exploration through reclamation.” The immersive exhibit challenges viewers to imagine what our world would have looked like if Spanish colonizers and the Taíno people had merged peacefully. Who and what would have been revered in this world? “We wouldn’t just see Jesus or other colonial symbology,” she reminds us. Instead, Vamp creates an imagined world where the Taíno take the forefront, and Spanish influence is subdued. 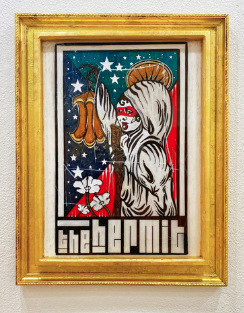 Vibrant laser-etched and hand-painted portraits of indigenous shamans (the Bohiti) as well as Cuban, Puerto Rican and Caribbean leaders line the exhibit walls. The wooden portraits are framed with gold to signify the minerals that the Spanish forcibly removed from the islands. The portraits are all from Vamp’s 22 card major arcana tarot deck, “The Bohiti Tarot” that pairs her artwork with Puerto Rican history, Spanish influence, and indigenous spiritual guidance. Altars adorned with candles, fruits, flowers, and religious objects that Vamp imagines would be found in the Bohiti’s dwelling (their Bohío) bring scent and color to the room. Fake flowers, fruits, and old materials are used on these altars, Vamp notes, because it reminds her of the lack of access to resources she felt growing up as a kid.

Putting the exhibit up was incredibly empowering for Vamp. It allowed her to ignite critical 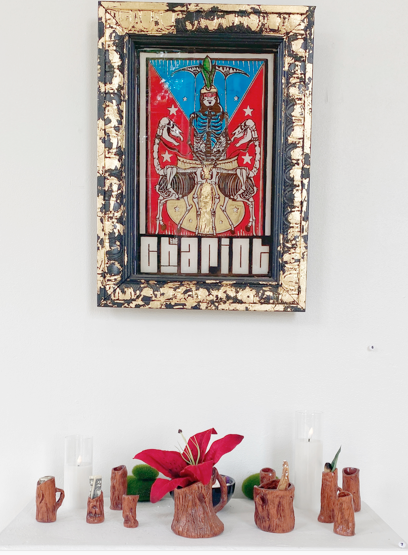 conversations, make new connections, and tell a story that has been neglected for so long. She feels that the visual impact of her work prompted viewers to question reality and dig deeper. The exhibit was an immense accomplishment for Vamp, whose main goal as an artist is to always push the narrative and bring people together. One of the main symptoms of colonization, she explains, is separation. If her work unites people, it is a success.

Upon closing the exhibit in July 2022, Vamp was overcome with emotion. It changed her forever, and “was physically, mentally, and spiritually exhausting.” Taking the installations down and boxing up her work was painful and symbolically felt like “a full-circle experience.” Removing the exhibit reminded her of all that has also been removed from indigenous history and culture. The content that sparked such important conversation no longer had a place. Nonetheless, Vamp is optimistic that El Bohío del Bohiti will rise again. She is currently working on finding a new location to host the exhibit.

While her work serves a broader community, Vamp knows that she makes art for herself. Life has thrown a lot of challenges her way and art has been a way for her to heal. In order to sort through some of her own trauma, she felt called to resurface the stories of her ancestors and reconnect with her indigenous culture. Vamp’s healing has spread to her family. “My mom is obsessed with my work,” reports Vamp, and is grateful to finally be learning about her roots. Thanks to her work, Vamp feels like her family is finally opening up to talk about topics that have long been neglected. 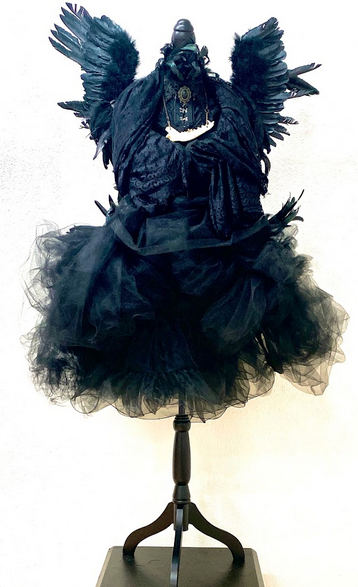 Vamp’s creative versatility enhances the impact of her work and makes it accessible for people of all backgrounds. She explains that similar to a doctor, an artist needs to “dissect” an issue from multiple angles in order to fully “cure” it. “Visual art is open-ended and up for individual interpretation,” says Vamp. Writing on the other hand, is her platform for communicating facts, timelines, and offering well-researched publications to the academic world. Similar to her visual art, Vamp uses writing to call attention to topics that have been ignored in mainstream culture.

Some themes from her written work include the Puerto Rican statehood movement, the impact of Spanish colonization on Puerto Rican identity, and missing/lost indigenous relatives. Having recently graduated with a BFA in Fine Art from Rocky Mountain College of Art and Design, Vamp centered her thesis on female Caribbean visual artists as Curanderas (folk healers) and keepers of history. She is also an Arts and Culture writer for Hyperallergic, an online publication, and Southwest Contemporary magazine.

Bohiti Botánica, Vamp’s organic skincare line, is another way she 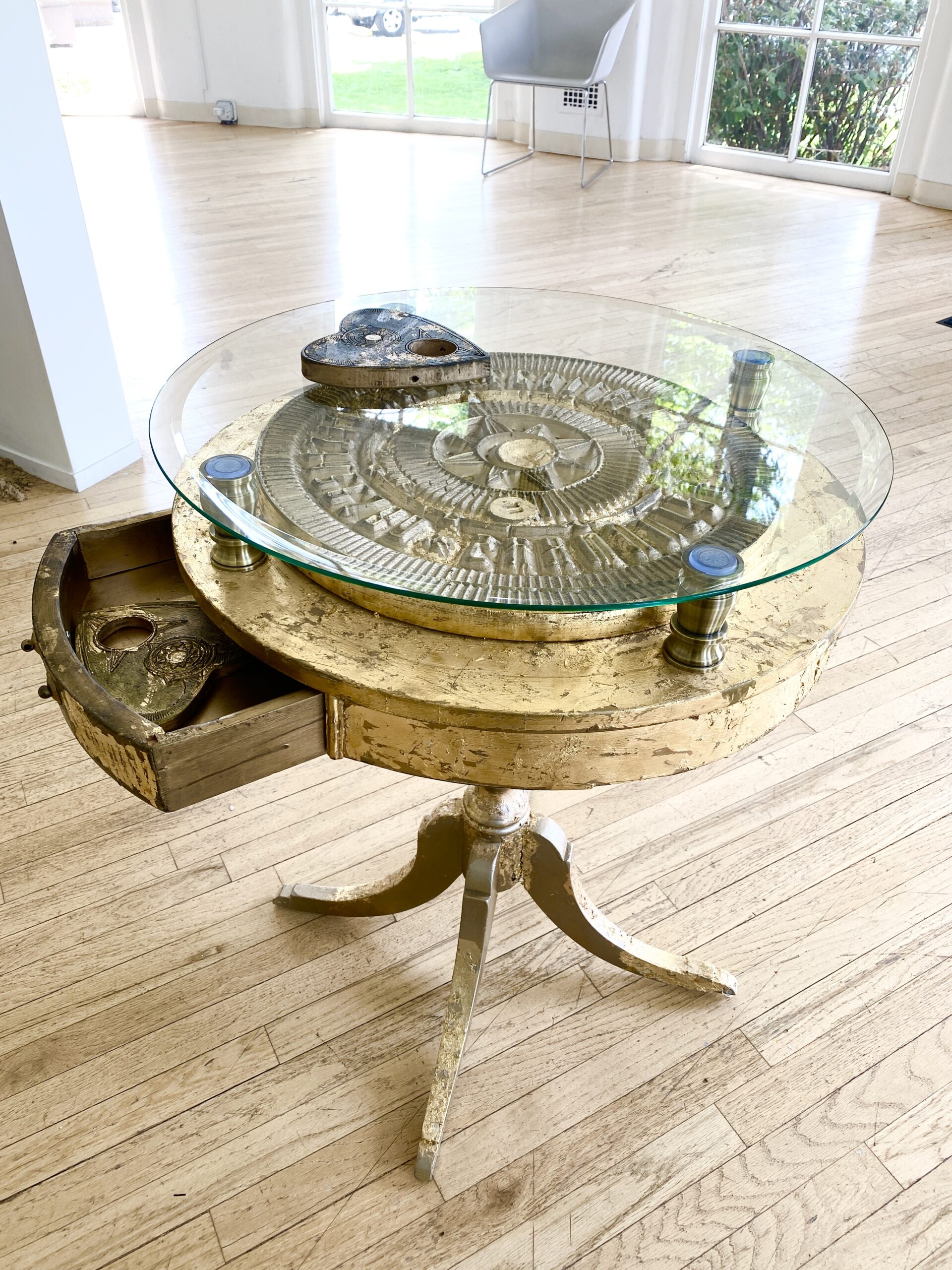 advocates for cultural reclamation. Vamp notes that many of the smells that she associates with Caribbean culture are lacking in today’s market. She felt called to create natural and pure products that remind her of her heritage. Coconut, palo santo, sea breeze, and other Caribbean inspired scents are the base for her homemade body butters, candles, soaps, perfumes, and bath salts. The intention behind her products is to relax, reset, rejuvenate, and cleanse the buyer, much like the Bohiti (shaman/healer) would do for its community.

As an artist, academic, community advocate, and self-proclaimed 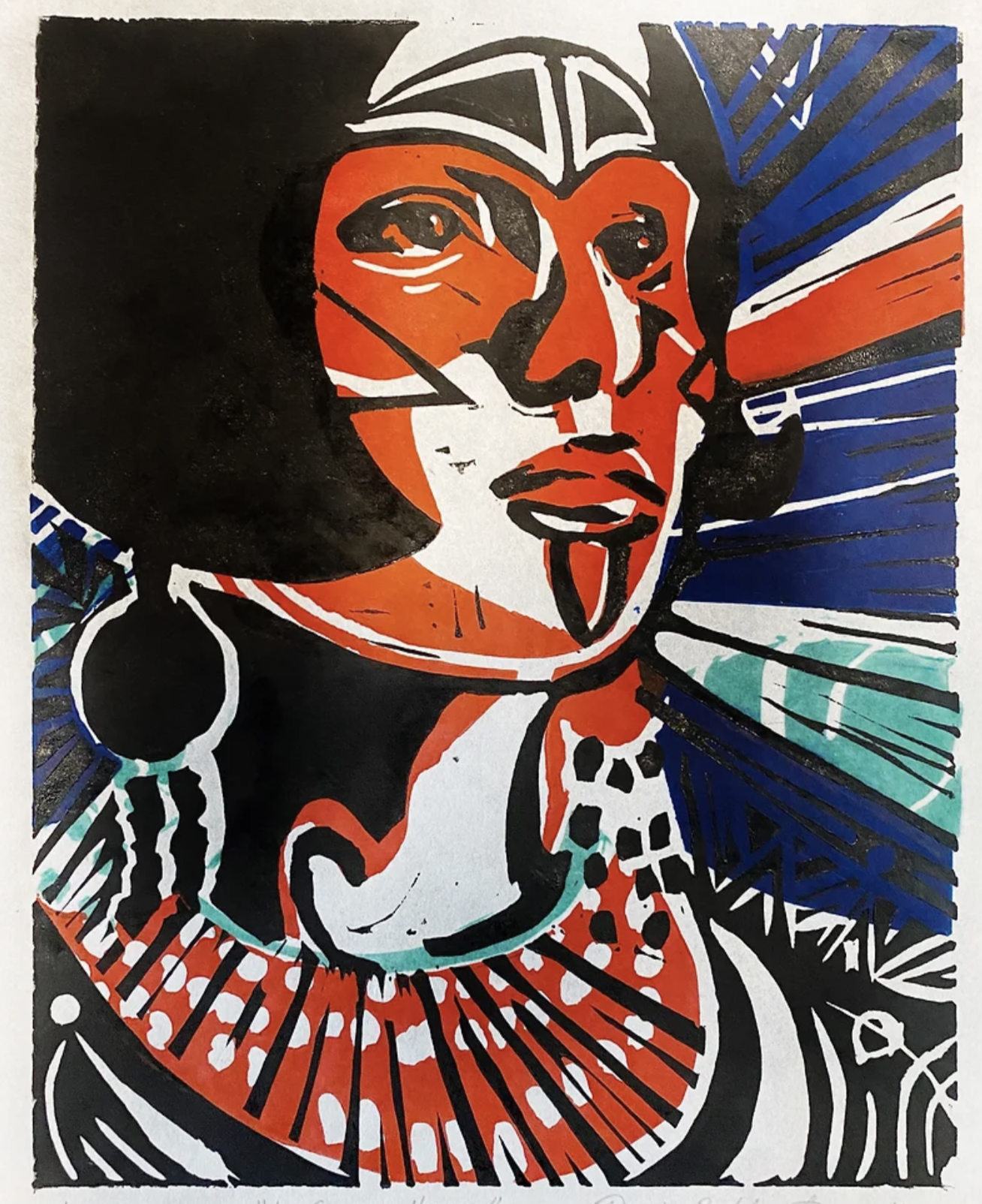 “serial entrepreneur,” Vamp has a lot to offer society. She seems to have an endless reserve of ideas for how to incite the change that she wants to see in the world. Her future goals include getting her thesis published, expanding the reach of her research, doing more public speaking, finding the next place to host El Bohío del Bohiti, and to revamp the aesthetic for the Bohiti Botánica brand. Within all her future pursuits, it is clear that Vamp will continue to push social narratives and keep asking challenging questions.

As Vamp has grown as an artist, her nickname has found new meaning. She reflects that much like the eternal nature of a vampire, the work that she does is everlasting. The realities, struggles, and truths of her people run through generations and are a part of her DNA. “Your work is created,” she explains, but “the impact is what lasts.”

As a nature-lover and artist, Zaylah Pearson-Good loves to write about themes pertaining to the environment, society, and culture. Working as Communications Manager for an environmental advocacy group in Southern Colorado, she is passionate about giving voice to local ecosystems, wildlife, and natural resources. When attending to her creative passions, Zaylah loves to paint, sew, cook, write poetry, and experiment with new weaving techniques. She is especially interested in creative projects that use materials that she finds on hikes, such as plant fibers for weaving, and pine needles for jewelry making.