“As the first African American and Native American sculptor to earn international recognition, Edmonia Lewis challenged social barriers and assumptions about artists in mid-19th century America,”
– a statement by the USPS for the Edmonia Lewis Black Heritage stamp

The Early Life of Wildfire

Edmonia Lewis was born in upstate New York in 1844. Her father was a free Haitian American and her mother was Chippewa. Following their deaths when Edmonia was around 5 years old, she went to live with her mother’s relatives where she was known as “Wildfire.”

Information about her early life is scant and it is said she would sometimes tell stories that made it sound colorful, but were often contradictory. Although Lewis gained international prominence during her lifetime, little is known about the last 20 years of her life and she was somewhat forgotten after her death. A number of her works were lost. She has gained more attention posthumously and historians have tried to piece her life together in recent decades. Edmonia Lewis at last gains the full artistic recognition she deserves and is acknowledged for her groundbreaking achievements as an American BIPOC woman who overcame numerous obstacles and found success in a white male dominated field.

The Education of Mary Edmonia Lewis 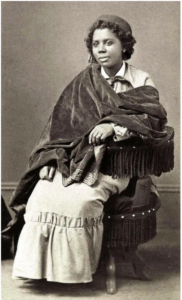 Her older brother, who had gained financial means in the American West, supported Lewis’ early schooling. He later helped her to attend Oberlin College in Ohio in 1859 at age 15. Founded in 1833, Oberlin was known for its values of coeducation, abolitionism, and integration. It was one of the first institutions of higher learning to admit African Americans. When Lewis entered, there were only 30 students of color enrolled, and most were male. Upon entering college she took the name of Mary Edmonia Lewis and her studies included zoology, French and art classes. It was at Oberlin that her artistic talent was revealed.

While she got along well with her white classmates, an incident in the winter of 1862 caused a stir when two of her housemates became quite ill, and she was accused of poisoning them. Although at trial she was acquitted, a white vigilante mob seized her one evening, severely beat her, and left her in a field to die. After she recovered from that attack, another incident occurred about a year later. She was accused of stealing art materials from the college. Again she was not found guilty, but she soon decided to leave Oberlin prior to graduation.

The Artist in Boston

From Oberlin in 1863 Lewis headed to Boston. 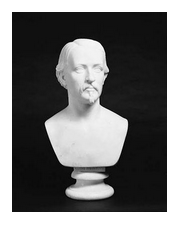 There she studied with Edward Brackett, a portrait sculptor and learned quickly. Under his tutelage she opened her own studio and started her professional life as an artist by producing portrait medallions. Her first plaster medallion was of abolitionist John Brown. She found her first notable commercial success with a bust of Colonel Robert Gould Shaw who led the all black Massachusetts Regiment in the Civil War. With her earnings, in 1865 she was able to travel abroad to London and Paris. She studied for some months in Florence where she refined her sculpting technique.

The Sculptor in Rome

Lewis eventually settled in Rome in 1866 where there was ample supply of fine white marble and a growing group of American artists. 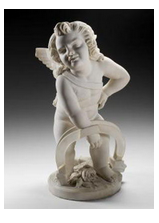 She learned Italian and opened a studio and was very productive creating numerous marble sculptures. In Italy Lewis adopted a neo-classical style, as did most 19th century sculptors. She learned by copying Renaissance sculptures and these types of carvings were popular with the American tourists. Her original sculptures drew favorable press in the European art scene and her work was much in demand. It was in Rome, where there was less hostility about race than in the US, that she became one of the most significant sculptors of that time, achieving international prominence.

While most sculptors hired Italian workman to create the final marble product from the artist’s plaster model, Lewis did the entire process herself. Her studio in Rome became the place to see for American tourists. Lewis carved busts of her patrons for a commission or as gifts of thanks, and she continued creating busts of famous Americans. Abraham Lincoln, Uylsses S. Grant, and Henry Wadsworth Longfellow were all subjects of her portrait work.

Lewis told the New York Times in 1878 that she was, “practically driven to Rome in order to obtain the opportunities for art culture, and to find a social atmosphere where I was not constantly reminded of my color.”

Sources, Parts I and II:

About the Author: Sarah Bennett