Lesson Two: Dancing Around the Center

As I mentioned in Lesson One, due to the gift of a homemade potter’s wheel, I decided to go looking for some natural clay out in the hills. As I was contemplating and exploring the small lump of clay I had brought home from the mountains, I was simultaneously staring at the homemade potter’s wheel. It was the reason I had gone out and found clay in the first place. I knew nothing about how to use the wheel. I had read one short sentence about working on a potter’s wheel. It said something like, “the potter centers the clay on his wheel and then pulls the clay up and shapes it into any number of different forms.” This was intriguing. I decided to give it a try.

I put some clay on the round wheel head and kicked the large cement base. The wheel head began to spin, and my clay flew across the room. I was a little stunned. I went over and picked the clay up off the floor. This time I pounded the clay down on the wheel head before I tried again. I got up on the seat and kicked the cement again. The clay stayed put for the most part but as I put my hands on the dry clay it just twisted off. I remember feeling perplexed. I pounded the clay as it went around and tried my best to keep my hands on it and to make it do something. After a few minutes my hands were a little sore and dirty, and bits of clay were sticking to my fingers. I got up and went to wash my hands. I grabbed a towel and walked back to the wheel. I tried this a few more times before deciding to bring some water back to the spare room with me so I didn’t have to keep getting up to go clean up my hands. I was at a loss and to be honest I was trying with all my might to control the situation. Nothing seemed to work. 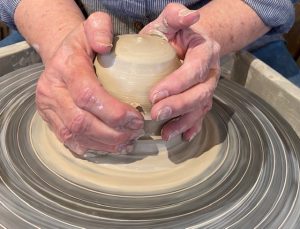 I decided the clay was not in the center of the wheel head. I scraped it off and moved it over until it looked like it was more in the middle. I was determined, persistent, and getting more and more frustrated. But I kept scraping it off and moving the clay around hoping to get it in just the right place. Eventually I was rinsing my hands and not taking time to dry them and to my surprise my hands could stay on the clay. It was wet and sticky, but I could keep my hands on it and the clay began to smooth out a little.

After an afternoon of being completely unable to make any sense out of what was happening, I headed back to the library.

In today’s world, all you would need to do is “google” how to throw a pot. What a difference a few decades make. I had no idea how to gain the knowledge I needed. I didn’t even have the terminology to find what I needed at the library.

After searching for days, I found a small pamphlet on how to make a teapot. I checked it out and headed back to the spare room. There wasn’t much information, but enough pictures and short paragraphs to give me a hint of how to begin on the wheel.

I tried and tried to get the clay in the middle of the wheel head. Making no progress and feeling defeated, I almost burst into tears and then, my shoulders dropped, and the clay began to speak to me. This time, I stopped and listened. Before I knew it, I was following my intuition and I could hear a voice in my head reminding me to relax, stay steady and the lesson of all lessons: “force is never the answer.”

Working at the wheel every day, taking comfort in making small lopsided pots, I felt like I had found my purpose. The summer flew by. In late August I emerged from the spare room, having made a crude teapot and I triumphantly announced I was a potter.

About the Author: Nancy Utterback

Nancy Utterback has worked as a potter for the past 40 years. She studied painting from 1972 through 1976 and along the way discovered pottery. In 1975 she opened her first studio and has gained a reputation as a nationally sought-after potter and master ceramics instructor. While maintaining a full-time studio, she has exhibited her work in galleries and exhibitions, and shows. She has experience both with teaching pottery and presenting workshops across the US. In 2015 she became the director of the Pottery Lab for Studio Arts Boulder and in 2016 she began creating East Side Art Institute.